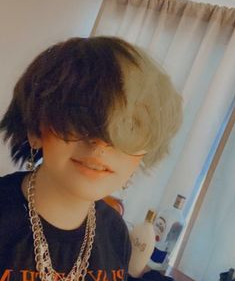 Hair Style:
short-ish hair that is very fluffy. It’s not curly, just fluffy. It would be easy to tell that he dyes it a lot.

Hair Colour:
Their hair would be split dyed a dark brown and light blonde. It was previously dyed a silver-grey colour.

Sexual Orientation:
omni-romantic with a preference towards males, asexual

Religious Beliefs:
He used to be christian just to fit in with their family’s beliefs, but is now an atheist, no longer being forced into a religion.

Political Beliefs:
Finn wouldn’t care for politics in the slightest, having no interest in them at all. In fact, they refuse to even join a conversation or talk about politics at all. He didn’t see the point in them, not wanting “useless information” in his head.

Appearance:
With striking green eyes that would almost make you shiver if they glared at you, and fluffy split dyed hair, he would stand at 5’7. They would have pale skin and be worryingly skinny, although if you brought it up, he would change the topic very quickly. Their face would be scattered with freckles, although his face was clear, with no acne at all. His ears would be pierced, usually wearing a pair of plain black studs.

Personality:
Finn Ikari, having a personality no one can necessarily describe well, as it changes constantly depending on who he is around and how they are feeling. Most often, he is snarky but still nice. If they like you (platonically or romantically), he is usually more sweet, nice, and clingy towards you. He tends to have mood swings, being able to go from hyper, happy, and nice, to moody, upset, and mean in an instant. Finn is almost always confident and ****y. They like to flirt with people to see people’s reactions, even if he doesnt actually like them.

Character Voice:
[link to the audio of what Finn’s voice would sound like: ]

Equipment:
Finn would often be found carrying 2 different pairs of glasses, mainly wearing his shades though. He would almost always carry lots of water bottles, known for his popular “finn water bottle scandal”. He almost always carries his Kuromi backpack, along with his signature bunny hat. There are rumours that they carry a shovel around with them for self-defence.

Clothes:
Although Finn’s style of clothes would constantly change, you can normally find him wearing a simple hoodie and sweatpants. He is known to not care about what he’s wearing and what other people think, even if sometimes he dresses feminine-like. He was maybe once spotted wearing a skirt, but no one really knows if they were or not. You’d have to ask his older brother, Raine, about that to see if it’s true or not.

Hobbies:
Finn loves to write, whether it’s a romance novel, or simple poetry, they will write it. Don’t expect to see his writing though, they rarely ever show it to anyone. They also enjoy hanging out with his friends, as he craves social attention.

Serious Problems/Flaws/Addictions/Disorders/Disabilities:
Finn is professionally diagnosed with ADHD. They also have undiagnosed severe depression, PTSD, and anorexia, which is why he is so skinny. He is known to have a terrible memory, forgetting lots of things, although it is unknown if this is related to a disorder. Finn is known to either verbally lash out at people when he is upset, or completely shut down, refusing to talk to anyone except his brother. Finn often lies about small things, the reason for why is unknown.

Skills:
Finn is quite talented at writing and singing. Both of which he will rarely share with anyone, unless he really trusts them.

Personality Quirks:
Likes to be the centre of attention, needs approval of others, doesn't like to eat in front of other people

Communication Quirks:
chooses his words very carefully, hints at what they want instead of stating it directly

Mother: Dead
“...my mom? She was certainly something. Glad she’s gone, honestly. I hate her.” Finn’s mother died in a car crash when he was 15. (The rest is a WIP because im lazy.)

Father: Unknown
“My dad? Bleh. Haven’t seen him in years. Couldn’t care less about what happened to him though.” Nobody knows what happened to Finn’s father, if he’s dead or just gone. Either way, he is out of Finn’s life. (The rest is a WIP because im lazy.)

Raine L. Ikari | Brother: Alive
“Hm? Raine? Yeah, he’s my brother! He likes to act sooo much older than me, but it’s really only by a few months.. Either way, he’s cool, a big nerd, but cool. I wish we could hang out more…” Finn’s brother, Raine Ikari, took on the role of taking care of Finn after their parents left. Finn trusts Raine the most out of anyone, but rarely sees him anymore, due to his brother getting caught up in relationships.

Keltza A. Mirza | Friend(?): Alive
“Keltz? Hm, that’s a tough question. She’s scary, to say the least. Threatened to murder me, twice! We’ve had our good moments and our bad moments, probably more bad than good but…oh well. Anyway! Who’s up for some truth or dare?” Finn isn’t sure how to feel about Keltza. He is scared and feels intimidated by her, but would consider themself friends with her nonetheless. It’s most likely a toxic friendship, but he refuses to acknowledge it.

Minghao | Best friend: Alive
“Hao? Oh! He’s just like a brother to me, I feel totally safe in his presence. He kind of reminds me of a puppy honestly, always eager to learn. He’s my best friend of all time!” Minghao, Finn’s best friend. Finn loves hao like a brother with all his heart, and trusts him almost as much as Finn trusts his actual brother.

Akito | Ex boyfriend: Dead
“Aki…? I’m sorry, I’m not sure who you're talking about. I’ve never met anyone by the name of Akito..” Akito, also known as Aki, was Finn’s ex boyfriend, who died. Finn loved him with all his heart, but Aki was kidnapped and then killed. Finn found the body, and reported it to the police in tears. Having been one year since that happened, Finn now denies Akito ever existed, not wanting to think about that tragic moment.

Xavier Jones | Friend: Alive
“Xav? Oh, he’s my friend I guess. I don’t really know much about him, but he gave me his sweater once when I was cold! He’s nice, but likes to scare me.” Finn is unsure of their feelings about Xavier.

Willow Echo | Friend: Alive
“Willow? He’s nice! A great friend, even if I only recently met him.” Finn is unsure of their feelings about Willow.

Backstory:
Finn “Wi-Fi” Ikari, born in Sacramento, California, with his parents and brother. His mother, being an abusive alcoholic that forced religion on her family, led Finn to hate her, wishing she was dead. His brother, Raine, mainly takes care of him now. After their mother died, and father disappeared, Finn and Raine moved to Karakura, Japan. Now, Finn has a few friends, but often misses out on chances to make new ones. [The rest is a WIP bc im lazy]​
You must log in or register to reply here.