Checkout our in character Social Media

Volleyball on SchoolRP is widely played among the players and is one of the many sports plugins that you can find on the server. This thread will guide you through the basics of the sport, such as the main objective of the game as well as basic moves to get you started. This thread will also go over the competitive scene, showcasing and explaining the different positions you can play as well as some revised game rules for competitive play. Please also note that you do not have to follow any of this information if you wish to play for fun.

Setting/Receiving - (EASY)
Setting the ball is the most important move you need to know when playing volleyball on SchoolRP. Setting the ball causes all the momentum the ball had to be killed and sent directly upwards, stabilizing it. This is why setting is often used for receiving the ball as well. To perform a set, hold SHIFT and LEFT-CLICK directly on the ball. It should look something like this:

Spiking - (EASY - MEDIUM)
Spiking will be your main method of attacking. Spiking is simply just hitting the ball down onto the other team's court. It is a lot easier to spike a ball when being set by another player. To spike, you need to be in the air and LEFT-CLICK directly on the ball while aiming at the place you want to hit to. Spiking relies heavily on timing, so keep that in mind if you plan to practice it. Spiking should look something like this:

Blocking - (MEDIUM)
Blocking is another defensive move alongside receiving. It is just like spiking as you are spiking the ball back to the opposing team's side. Blocking can also be used to shut off an area for the opposing spiker to spike and narrows down their options on where to attack, assisting your back row in easily positioning themself to where the spiker may hit. Like with spiking, all you have to do is JUMP and CLICK on the ball to send it back to the other team's court. (YOU MAY NOT DO THIS ON SERVES)

SELF SPIKE - (HARD)
Self spiking is used mainly in 1v1s when there isn't anyone else to set you but can also be used as a surprise attack in a 3v3. Self spiking utilizes the other two moves before this, so it is best practice to understand the other two before attempting this. To perform a self spike, you want to set the ball at head level, press SPACE immediately after you set the ball upwards, and finally spike the ball as you are jumping up with it. This one is quite hard to explain in text, so I suggest asking someone who knows how to self spike to teach you if you didn't understand this explanation. The self spike should look something like this:

POSITIONS ON THE COURT

Spiker
The spiker is the main attacker on the team. They are the ones who are receiving sets from their setter and spiking the ball down on the other team's court. As a spiker, your main job is to look for open spots on the opposing team's court and spike the ball there. The spiker is able to help with defence in two ways: blocking, or receiving, depending on what your team wants to do defensive wise.

Libero
The libero is in charge of the defence for the team. Specifically, they are the ones in the back row picking up the balls that get past the blockers. They are situated in the back of the court. Liberos are not able to serve but are allowed to spike as long as they jump before the 10-foot-line. 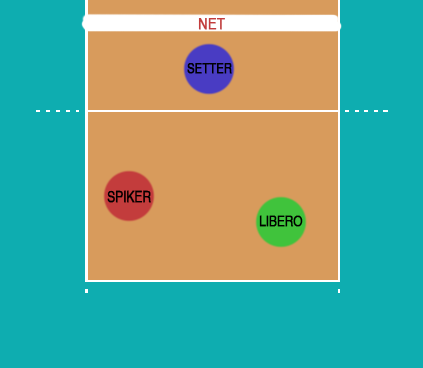 (Basic formation for these positions.)

COMPETITIVE RULES
Clicking on the link below will direct you to the competitive ruleset for volleyball on SchoolRP. If you have any questions about the rules, join the discord below and ask your question in #faq.

Hi, i was interested in joining the volleyball club but the discord invite has expired - could i have one, my discord is Heatherielle#9946

Heatherielle said:
Hi, i was interested in joining the volleyball club but the discord invite has expired - could i have one, my discord is Heatherielle#9946
Click to expand...